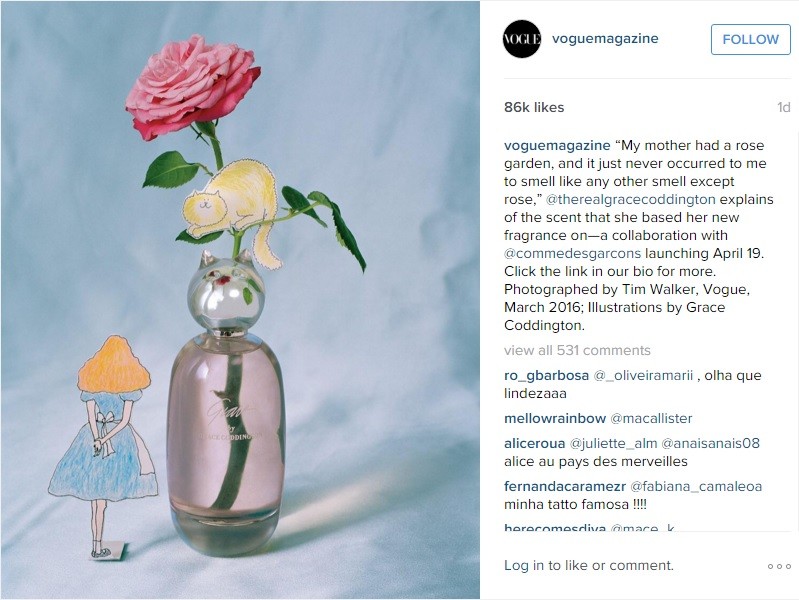 Fashion icon Grace Coddington is teaming up with Comme des Garcons to make her debut into the fragrance industry.

?The former Vogue fashion editor will release “Grace by Grace Coddington” in April, Vogue reports, and the scent will be packaged in an Alice in Wonderland-themed bottle.

“My mother had a rose garden, and it just never occurred to me to smell like any other smell except rose,” the style icon told the publication.

The romantic scent will come in a bottle designed by Fabien Baron, capped by a top depicting the famous Cheshire Cat from Lewis Carroll’s Alice in Wonderland, dreamt up by Coddington herself.

The news was broken by US Vogue, whose Instagram account published an illustration by Coddington showcasing the chic bottle and incorporating the Alice and Wonderland theme.

The fragrance is a major stepping-stone for Coddington, who stepped down as the creative director of US Vogue in January after more than two decades at the publication. Commenting on her departure at the time, she said: “I’m not running away from Vogue, because it has opened so many doors. But it will be nice to collaborate, and nice to go out [and] give talks to people. It’s just another approach. I’m certainly not going into retirement. I don’t want to sit around.”

“Grace by Grace Coddington” will be available from April 19.