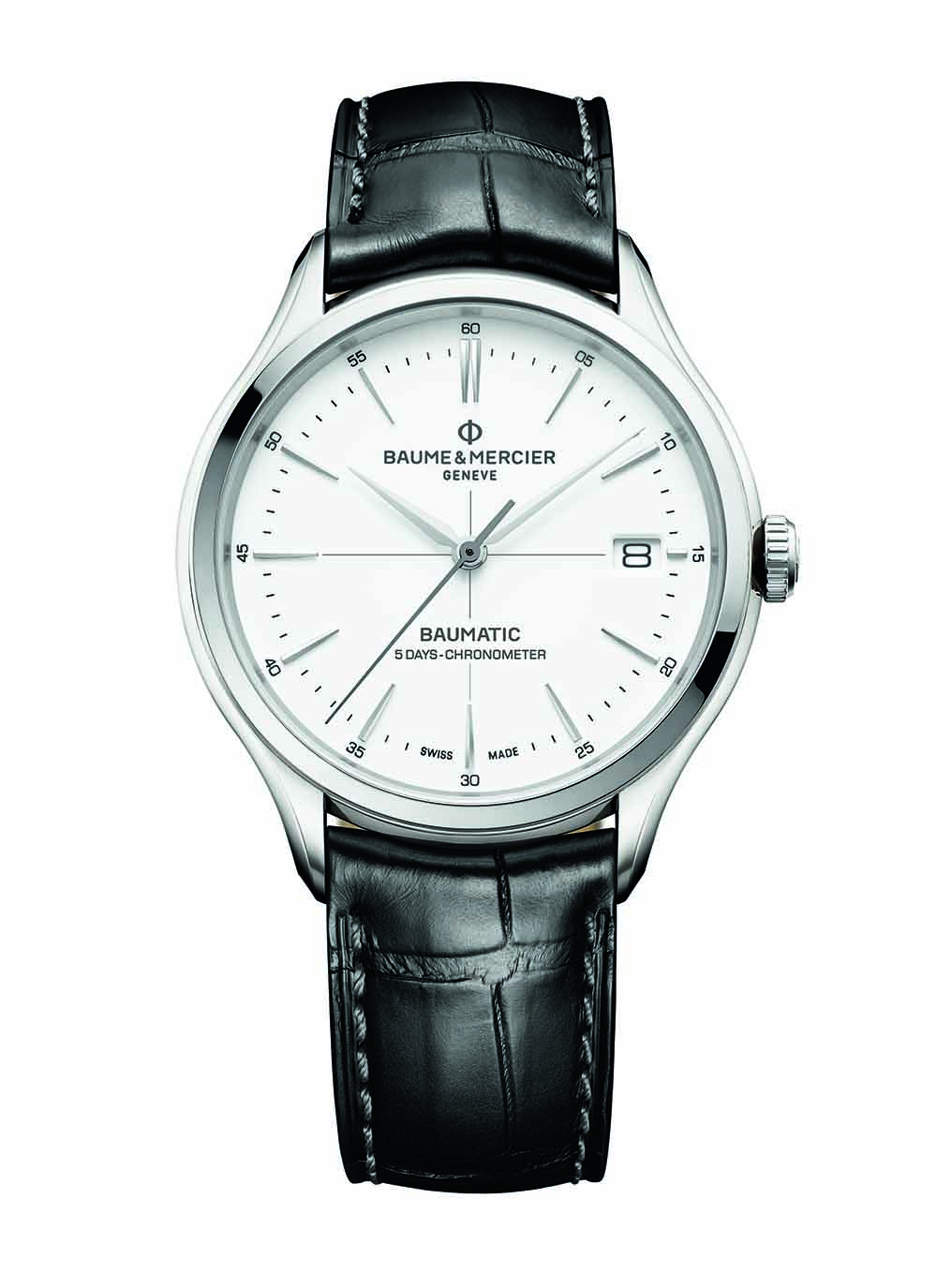 “For Baume & Mercier, 2018 will be a year of surprises and audacity,” read the Richemont-owned brand’s press release in the publicity build-up prior to SIHH. True to its words, Baume & Mercier delivered. In Geneva, the brand unveiled the Clifton Baumatic collection – a new range of elegant dress watches that included the Five-Day Chronometer.

The big surprise came in the form of a new movement that drove these watches – the Baumatic BM12-1975A – developed by Baume & Mercier in collaboration with the ValFleurier manufacture and Richemont’s research and innovation team. What set tongues wagging were the implications of this new movement, as well as the accessible price points of these nicely made watches. Baumatic has existed since 1975, while the Clifton line of watches, since its 2013 launch, has grown to become a Baume & Mercier staple. By combining the two names, the brand is able to link the past with the present and future. The brand had contemplated making its own mechanical movement for some time now, but it wanted to offer customers a better product that could tackle issues such as accuracy, dependability and affordability. When the opportunity finally arose, it took the Richemont research and innovation team about four years to build the Baumatic BM12-1975A.

According to Alain Zimmermann, the CEO of Baume & Mercier, the brand conducted extensive research into what customers are looking for and why watches are returned for service. As such, the Baumatic BM12-1975A adheres to strong performance standards to ensure reliability and efficiency – the things that really matter to customers.

Watches are regularly subjected to magnetic fields from everyday items such as mobile phones, laptop computers and even the clasps of handbags, all of which may disrupt a watch’s movement. To tackle this issue, Baume & Mercier set the bar high. The Baumatic movement proudly claims to be resistant to magnetism up to 1,500 gauss. (By comparison, the norm for a movement to be considered “anti-magnetic” is 60 gauss.) The brand credits this level of anti-magnetism to the use of silicon and non-ferromagnetic components.

When it comes to accuracy, the new self-winding movement doesn’t disappoint, either. It ensures the watches’ timekeeping stays stable at a range corresponding to -4/+6 seconds per day, sufficient enough to meet the criteria of the Official Swiss Chronometer Testing Institute (COSC).

Similarly, the movement’s use of PowerScape and Twinspir technology for the hairspring, escape wheel and lever endows the watches with five days of power reserve – three times the average automatic watch. In other words, when you take your Baumatic watch off Friday night, it should still be running spot-on if you strap it on Wednesday morning. Another plus offered by the new movement is less servicing. Typically, a watch should be serviced every five years, but Baume & Mercier says its Clifton Baumatic watches are capable of sustaining “more than 10 years of intensive use” between services.The aesthetics of the new watches are pleasing as well. Each model in the collection exudes a traditional, classical appearance as with previous Clifton models. The 40mm stainless steel case is beautifully detailed, with a porcelain white dial. Long, sharply pointed lancet hands, discreet minute markers, a cross-hair dial and sharply delineated Arabic numerals provide a back-to-basics look. The black alligator strap with pin buckle can also be easily removed without tools, allowing wearers to frequently change the appearance of their Baumatic timepiece. 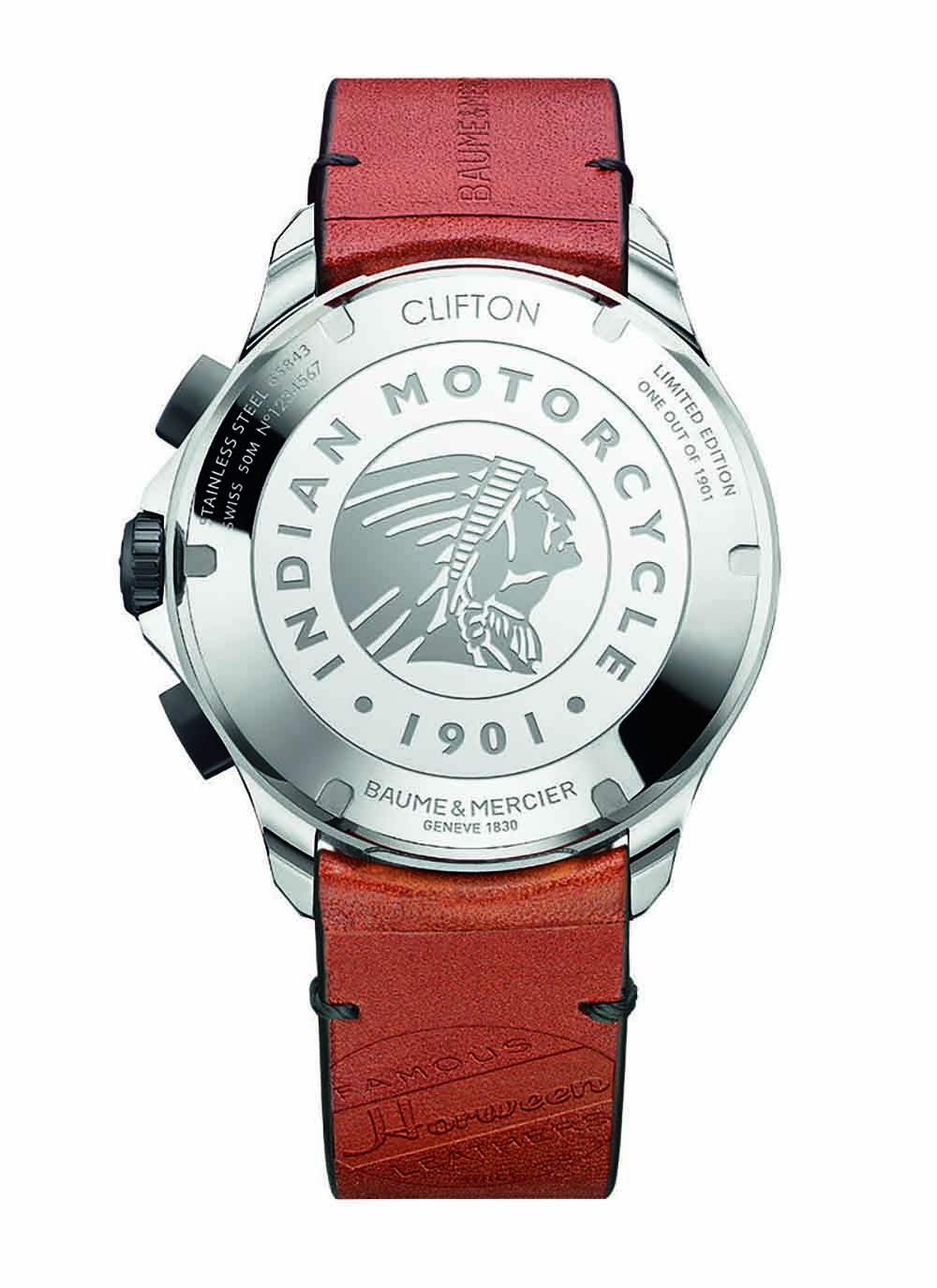 The Five-Day Chronometer has “Swiss-Chronometer” inscribed on the dial and the movement is visible through the sapphire caseback. It comes with COSC certification and two years of warranty. For non-COSC models, Baume & Mercier says it will provide a certificate when requested, as all Baumatic watches meet COSC standards. And let’s not forget the price. The Five-Day Chronometer will cost about US$2,800 when it becomes available in September – and fans say this is a great price for a quality watch that packs quite a punch. Last year, Baume & Mercier announced a collaboration with Indian Motorcycle, America’s first motorcycle company, to create timepieces that represent a biker’s passion for precision and speed. The flagship timepiece of this partnership – the limited edition Clifton Club Indian Burt Munro Tribute – pays tribute to Burt Munro, the New Zealand-born motorcycle racer. He’s renowned for setting the land speed record of 184mph (which still stands today) for under-1,000cc bikes at Bonneville Salt Flats in Utah on August 26, 1967. The story behind Munro’s unwavering commitment to handcraftsmanship, precision and speed is even more captivating. He spent 20 years modifying his record-setting 1920 Indian Motorcycle Scout using basic tools and even made his own engine parts from salvaged metal. The motorbike was initially capable of a top speed of 55mph. By the time Munro set the record, he was a 68-year-old grandfather.The Clifton Club Indian Burt Munro Tribute is an automatic chronograph that commemorates the legend of Munro and Indian Motorcycle via a host of details. The motorcycle’s shade of red is seen on the strap and chronograph hands, and Munro’s lucky number (35) appears on the seconds counter. The watch comes with a 44mm stainless steel case that has a tachymeter scale on the bezel, with the 184mph world record highlighted on it. On the other side, this timepiece displays the Indian headdress logo of the Indian Motorcycle Company, together with the number of the limited edition: 1967. The silver dial, with sandblasted and snailed finishes, was meant to emulate the surface of the Bonneville Salt Flats.