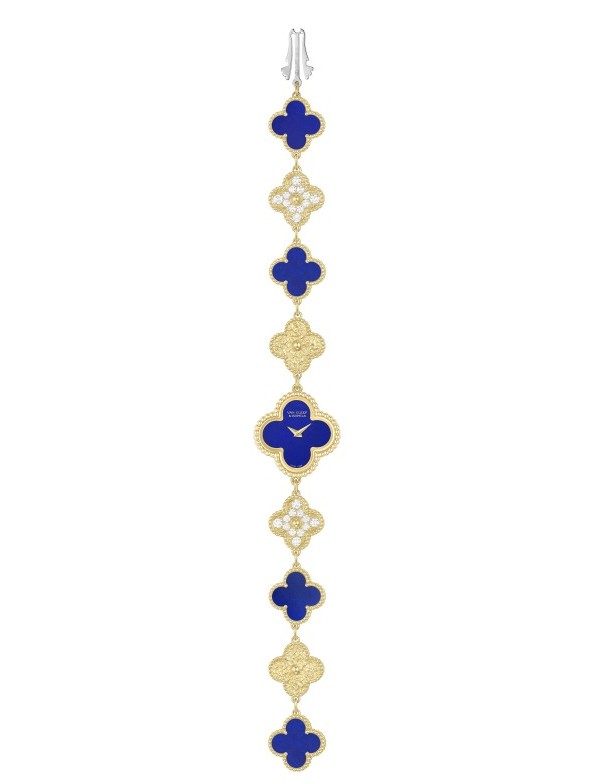 For Van Cleef & Arpels, the essence of “time” is synonymous with poetry – each season, the jewellery-focused maison tries to capture time’s fleeting moments with dreamlike timepieces that never cease to surprise. In Geneva this year, the company took guests on a delightful intergalactic journey to see the stars, taking in the stunning Lady Arpels Planétarium and the unique Midnight Zodiac Lumineux watches from the Poetic Complications line, before settling back to earth in a garden filled with secret delights.

The blend of storytelling and timekeeping has served as the foundation of Van Cleef & Arpels’ Poetic Complications range since its launch in 2007. Watches from the collection are known for their ingenuity and artistry, pushing technical virtuosity to its limits. And the Lady Arpels Planétarium is such a watch. This showstopper marries the beauty of the galaxy with the artistry of creative watchmaking and high jewellery. This isn’t the first time Van Cleef & Arpels has taken inspiration from the stars to create such a complicated timepiece; it launched the Midnight Planétarium watch for men in 2014. 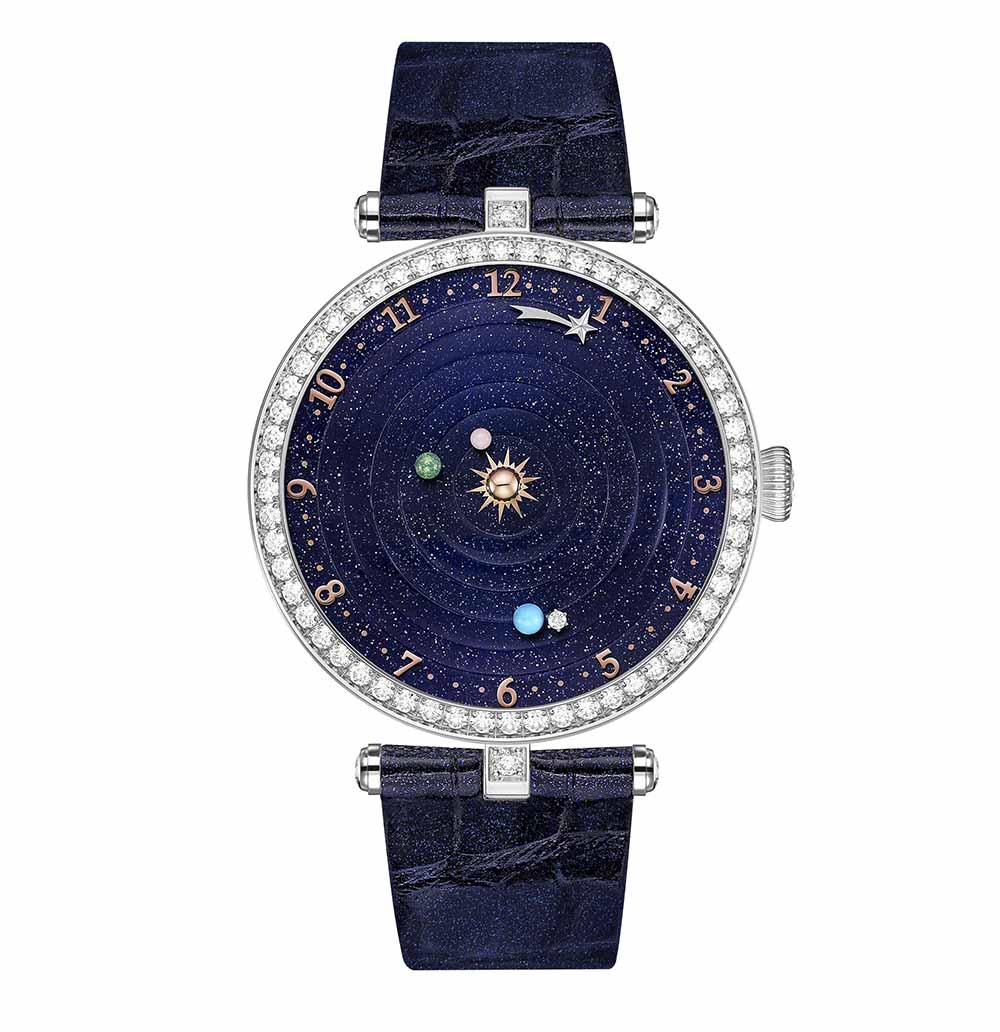 Now it’s the ladies’ turn to stargaze in a precious setting. While the maison’s first astrologically inspired creation focused on six planets, the 38mm Lady Arpels Planétarium celebrates three. This, however, doesn’t diminish its astounding horological feats. The detail, the craft and the fun are all still there in this highly complicated watch.

Available in 18K white gold case set with diamonds, this timepiece shows the real-time positions of Earth, Mercury, and Venus around the sun, as well as the position of the moon around the Earth. Our planet is depicted as a turquoise stone, Mercury is in mother-of-pearl, Venus in green enamel, the moon is a brilliant-cut diamond and the sun shines in 18K pink gold. They sit atop a sparkly rotating dark-blue aventurine dial with concentric rings. The marvel of this watch is how the planets move at their actual speed around the sun, with Mercury orbiting the dial in 88 days, Venus in 224 days and Earth in 365 days. A rhodium-plated gold shooting star poetically tells the time from the periphery, while the diamond moon acts like a moonphase indicator, revolving around Earth every 29.5 days and passing from light to dark.

The back of the watch is equally striking. Date, month and year are shown via two apertures. There is also a colour-coded key that indicates the material used for the planets. In the centre, the rotor in white gold and black PVD is bedecked by a diamond crescent moon with a turquoise disc at its centre to provide weight to the movement. This is a manually wound watch with a power reserve of 40 hours and comes with two straps: sparkling blue alligator (to match the dial) or a diamond-covered one.

Continuing with the cosmos theme is the Midnight Zodiac Lumineux watches, a collection of 12 limited edition timepieces dedicated to the star signs in the Western zodiac. With self-winding movements, each piece is encased in a 42mm white gold case featuring a midnight-blue dial, with the symbols of the zodiac outlined in translucent enamel beads.

What makes these watches unique is a light-on-demand function. The mechanism that operates this feature is a module developed specifically for Van Cleef & Arpels. It incorporates a ceramic blade, in which vibration – under the effect of the wearer’s movements – enables electrical energy to be generated mechanically. This energy is then used to power the four-to-six LEDs on the 12 zodiac signs; at the touch of a button, they sparkle like genuine stars for about three seconds. This watch has a 40-hour power reserve and comes with a black alligator strap.

Alongside the flagship pieces of the Lady Arpels Planétarium and the Midnight Zodiac Lumineux, Van Cleef & Arpels has also unveiled some more terrestrial but no less poetic creations – including the Le Jardin collection, inspired by flora and fauna. Flowers, one of the maison’s recurrent sources of inspiration, have appeared in numerous forms in its timepieces and jewellery, and 2018 is no different. 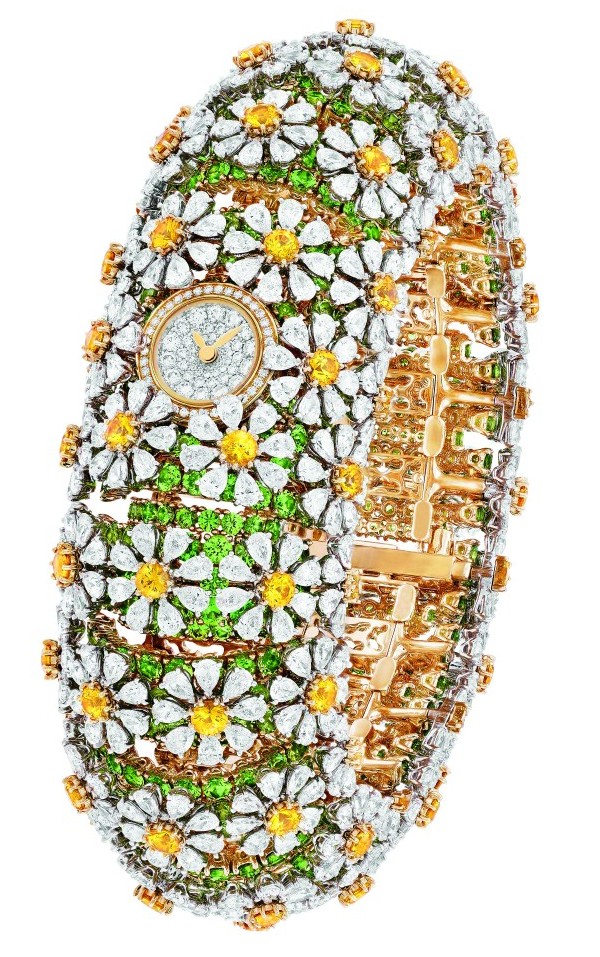 The Le Jardin collection comprises eight designs, including five extraordinary unique pieces and three “repetitive” models, a term the maison uses to refer to watches it produces in series. Six pieces in the collection perpetuate Van Cleef & Arpels’s tradition of secret watches (which began in the late 1930s) with opulent gem-smothered designs. They’re all driven by a quartz movement that shows the hours and minutes.

One exquisite piece that had the ladies drooling in Geneva was the Dandelion Secret watch, which doubles as a torque bracelet. Brimming with white and yellow diamonds, it’s crafted with great attention to its inspiration – a dandelion flower. This timepiece is more jewel than watch and features a dial that hides beneath a dandelion bloom on one end of the bracelet, while the other end features a lacy seed head in the form of a ball of diamonds. Thanks to the use of the tremblage technique, this watch holds another surprise – when the hand moves, the little diamond seeds quiver delicately.

On the Chrysanthème Secret watch, generous and finely chiselled corolla unfurl in a spiral of diamonds and pink sapphires. The dial is revealed through a hidden mechanism that sparkles with spessartite garnets. The Pâquerette watch combines pear-shaped diamonds with round yellow sapphires to form a bracelet resembling the grass of a meadow. A dial sparkles at the heart of the piece. 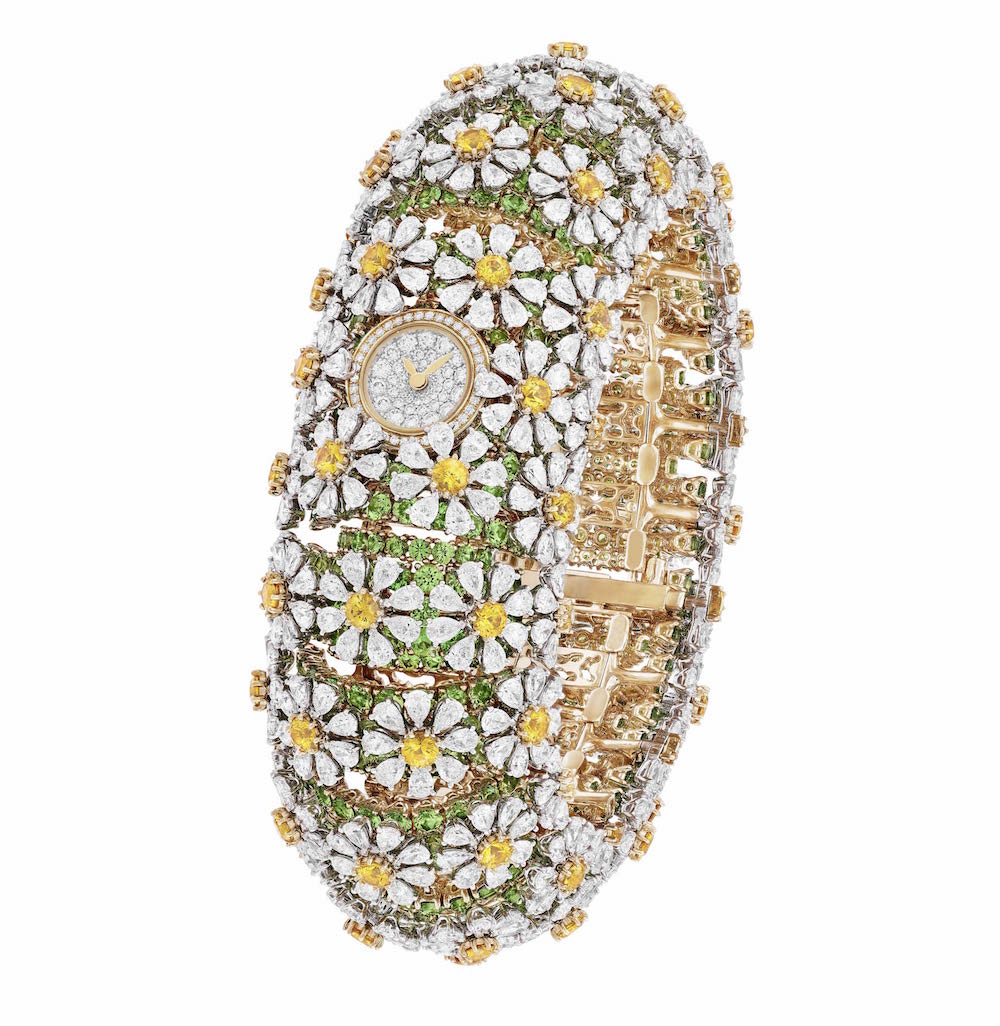 Timekeeping takes place beneath the heart of a daisy of yellow sapphires in the Marguerite Secrète watch – also wearable as a clip, in keeping with Van Cleef & Arpels’ tradition of transformable creations. Meanwhile, the hollyhock flower gives life to the youthful-looking Primerose Secrète watch, which can also be converted into a brooch in different shades of pink sapphires. The watch is revealed by pressing a petal in the corolla.

The Cosmos Secret watch, completely paved with white diamonds, reflects the native flower of meadowland Mexico. The dial is hidden underneath the central disc. This watch can be worn with a navy-blue grosgrain bracelet or as a clip.