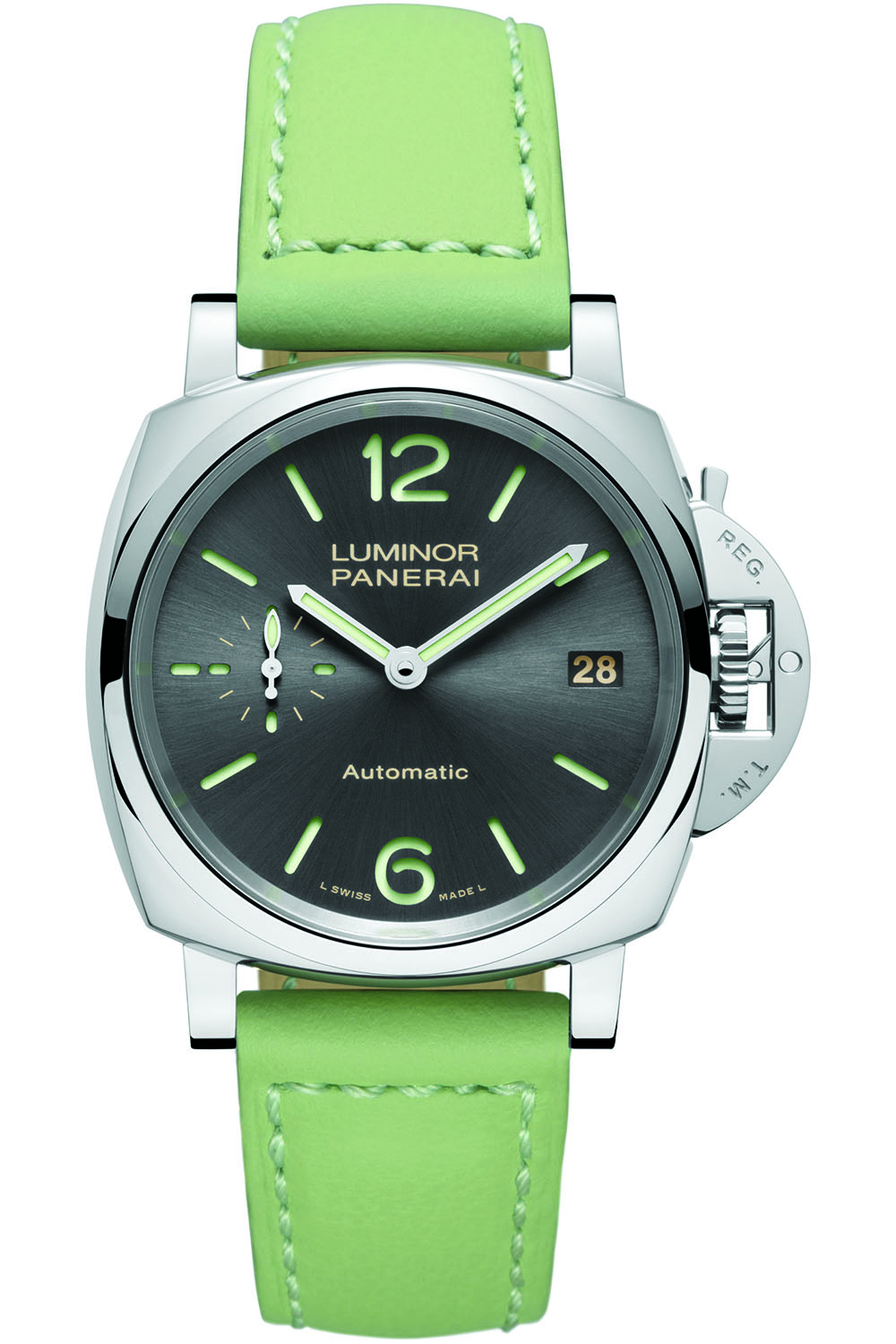 Outgoing CEO Angelo Bonati has been with Panerai since its formative years and is leaving the company with a great commercial bang. The brand, which has built its DNA around big military watches, is finally bowing to the shifting tastes of consumers in recent years. Its latest range of timepieces, at 38mm, features the smallest Panerai watches ever to have been produced.

The new novelties are part of Panerai’s existing dress watch collection, the Luminor Due, which was launched in 2016 – taking the signature design codes of the popular Luminor collection and giving it a thinner, more elegant case. There were two sizes available at the time: the 45mm with a self-winding calibre and the 42mm with a manually wound calibre. The new 38mm novelties are also automatic watches, with a power reserve of three days. They also come in a range of fresh colours that will appeal to Panerai’s female customers and we’re sure will be a hit amongst men looking for smaller dial sizes, too.

The PAM0075 3 Days Automatic Acciaio, in steel, houses the Panerai calibre OP XXXIV, a new “group movement” from Panerai that’s been developed by Richemont and made available to other brands within the group. Featuring a black dial, the watch is fitted with a pretty mint-green alligator strap. The PAM00756 has a red gold case and an ivory-coloured dial with striking blue numerals and a matching blue alligator strap; this reference comes with a sapphire glass case back that allows the wearer to admire the movement inside. The same dial is also seen on the PAM00903, but in steel. The limited edition PAM00908, also called the Oro Rosso, matches the red gold case with a black dial, but more interestingly, the case back is engraved with the Chinese character for “fortune”. All of the references come with a seconds sub-dial at nine o’clock and a small date window at three o’clock.

Panerai has also released two new versions of the Luminor Due in 42mm, which also runs on the OP XXXIV calibre. The PAM00904 in steel comes with an anthracite sun-brushed dial, a sapphire case back and a brown leather strap. The ivory dial with blue numerals is found on the PAM00906, also in steel and at 42mm.

New updates have also been made to the Luminor Base Logo collection; marketed as the brand’s entry-level collection, the novelties now come with an in-house movement and a three-day power reserve. There are six references in this particular model, three of those featuring an additional small seconds at nine o’clock, and each with a different colour design. Our favourite is the PAM00774, which comes with a black dial and a blue OP logo, and is fitted with a denim-looking strap with bright blue stitching, while the most classic-looking version is probably the PAM00773, with a black dial and a white OP logo fitted with a classic black leather strap. 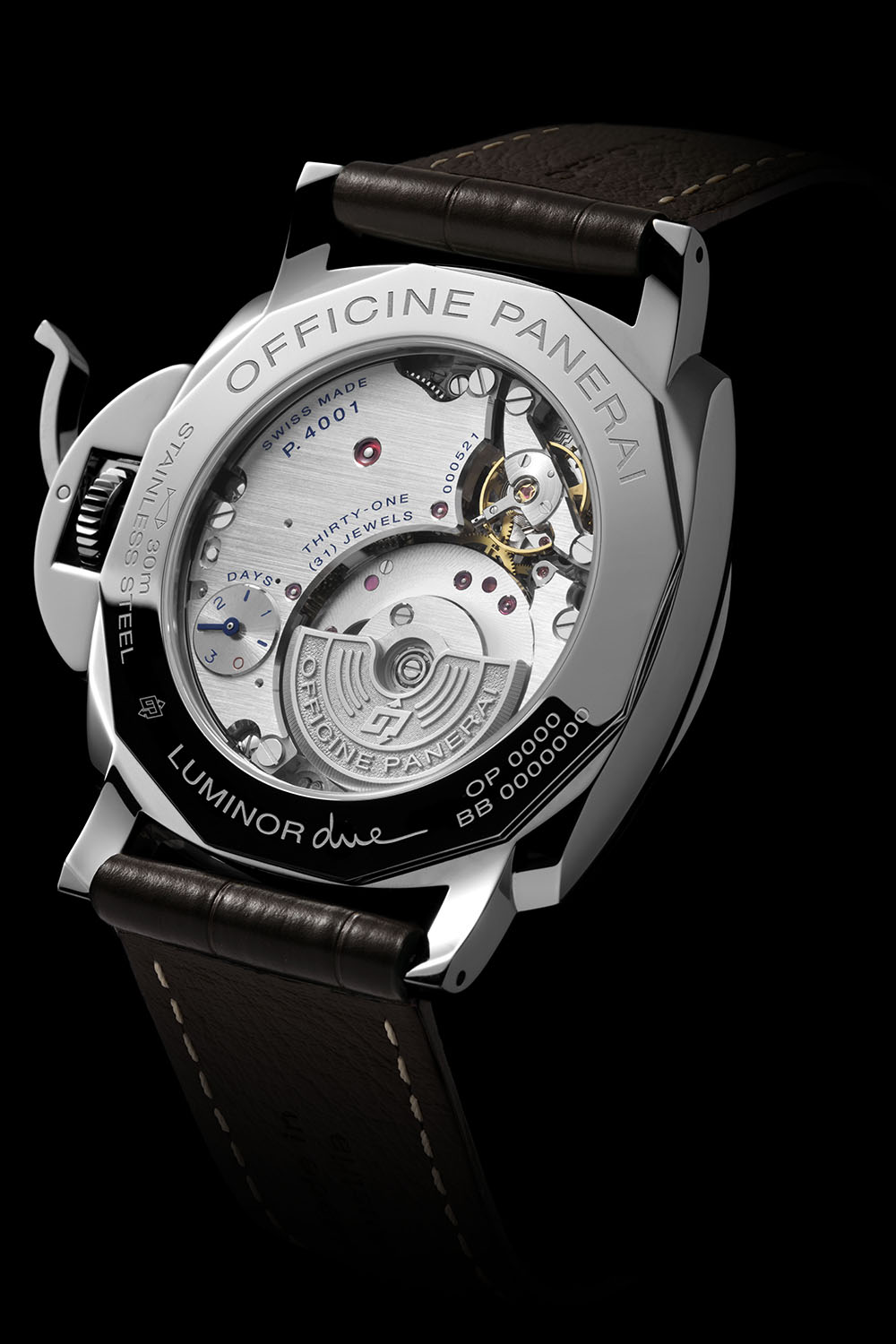 Onto Panerai’s more complicated timepieces – the talking piece at the show, we think, is the L’Astronomo Luminor 1950 Tourbillon Moon Phases Equation of Time GMT, reference PAM00920, dedicated to famed astronomer and scientist Galileo Galilei. The skeletonised timepiece is one of Panerai’s most complicated, and provides not only the hours, minutes, small seconds, date, and month indicator, but also displays the equation of time, a second time zone, a power reserve indicator of 96 hours and the phases of the moon, which is a complication that’s displayed through the clear sapphire case back, marking a first for Panerai. At 50mm, the made-to-order watch features the hand-wound P.2005/GLS calibre (GLS standing for Galileo Luna Scheletrato), is cased in brushed titanium and is water-resistant up to 10 bar (100 metres).

Panerai also unveiled updates to the Lo Scienziato Luminor 1950 Tourbillon GMT Titanio 47mm (PAM00767), which was launched in 2016. This special edition timepiece utilises 3D printing (in a method called direct metal sintering) to compress 0.0002mm-thick layers of titanium into its 47mm diameter case. While 3D printing is heavily used in the design and prototype stages of making a watch today, Panerai is among the first to use the technique in finishing the timepiece. The model’s movement is the hand-wound P.2005/T calibre, which is also made of titanium, and it has a power reserve of 144 hours. The watch made its way to the market in 2016 to resounding success, and has been called one of the brand’s most innovative and surprising creations. This year’s updates are in the aesthetics: the blue of the hands are now extended to the inner rim of the bezel and to the stitching on the leather strap. The model is limited to 81 pieces.